Home »Prohibition Era Medicinal Whiskey » Up through the ground came a bubblin crude (whiskey, that is, Black Gold)
March 24, 2014

Up through the ground came a bubblin crude (whiskey, that is, Black Gold) 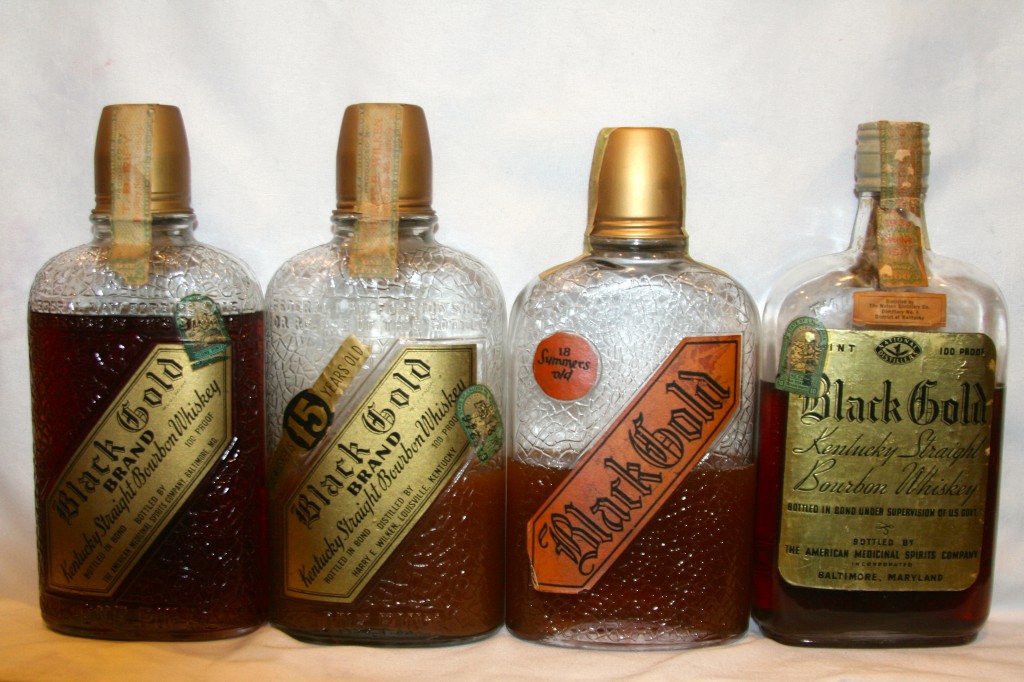 While there was no such thing as Soda Prohibition, unless you consider Mayor Bloomberg’s attempt to super down-size sugary drinks a qualifier, there was a prohibition on alcohol. Not some encouragement by the First Lady to plant flowers or get in shape (admirable, nonetheless) but an amendment to our Constitution. That’s some serious Messin’ with Sasquatch right there. 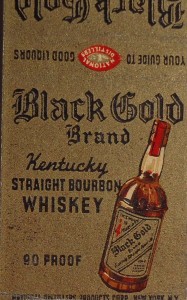 So, what’s in a name? Enter Black Gold Whiskey. Put yourself squarely in the middle of the Great Depression. Times where tough, to put it mildly. If you were lucky enough (or smart sick enough) to get your hands on some Black Gold, would you care where it came from, who distilled it, who bottled it, or who distributed it? Me thinks not. When I put myself in those worn out shoes I have to admit that I would be silly happy to get my grubby mitts on a pint of “Aged in the Wood” juicy juice no  matter where it came from or how over aged and “oaky” it might be. With that said, let’s take a look at a broken Brand Promise: Black Gold. 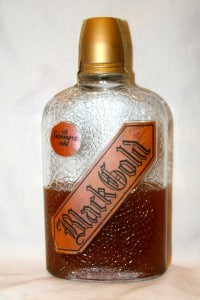 Our first example, and the oldest as far as the distillation date goes, is this straight forward Black Gold. 18 Summers Old (sexier than 17 years) this bottle is beautifully embossed both front and back. The provenance of the liquid, according to the back label and tax stamp, is as follows: 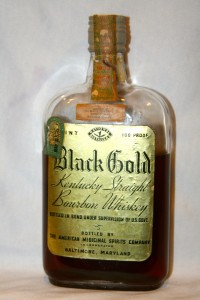 Our next contestant features a more traditional label and relatively boring straight glass container. Where our 18 summer old variation is labeled as whiskey on the back label, here we have a bona fide Kentucky Straight Bourbon Whiskey. Sounds promising. 16 years old, a common age for the era, this Black Gold has the following heritage:

Distributed in the State of New York by the National Straight Whiskey Distributing Company Incorporated (somehow this pint made it to California judging by the tax stamp).

Made in Kentucky, bottled in Maryland, distributed out of New York, sold in California. Whew!

Our next two bottles are interesting for a couple of reasons. At first glance, they look identical as long as you overlook that one is contaminated. Anyway, both are in exactly the same embossed glass bottles that prominently feature the Black Gold and National Distillers logos on the reverse. By the time these pints came out National Distillers had purchased AMS and bottled under that name for several years after Repeal. The other interesting thing is both of these bottles feature the “Federal Law Forbids Sale or Reuse of this Bottle“, which is a dead giveaway these bottles are post-prohibition. 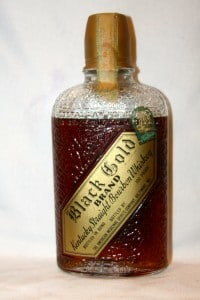 Here’s the stats for this Black Gold. Unfortunately, the tax stamp is illegible except for the dates.

This bottle of liquored wood is another example of something special that was made before The Great Fail and bottled a year after Repeal. Somehow this whiskey straddled the entire mess of Prohibition. It went to sleep and woke up 18 years later much like the ill-fated crew of the Nostromo from the movie Alien. 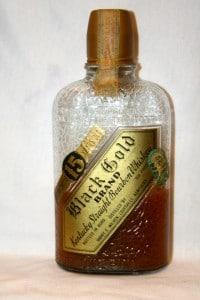 Finally, we have a 15 year old Black Gold per the extra label plastered above the main.  A virtual duplicate to the prior bottle — but not so fast. Here are the facts:

The mystery with this bottle, unlike its sleepy predecessor, is what’s left of the booze was made in 1917, bottled in 1932 and has the post-prohibiton “Federal Law Forbids” embossing on the glass. Based on my research this bottle could very well be a solid example of a re-bottling so this leftover whiskey could be sold legally after Repeal.

Now that I have presented the facts, you are probably just as confused as I am as to what the Brand Promise of Black Gold is. The common threads are the brand name and the bottler, although hailing from two different cities: Baltimore and Louisville. However, not one of these bottles of Black Gold were distilled by the same distiller. Which distillery has the pedigree to stand behind the brand? White? Nelson? Ripy? Wilken? Could we trust any of them to give us The Real Thing, whatever that is? I’m sure they would have all said yes.