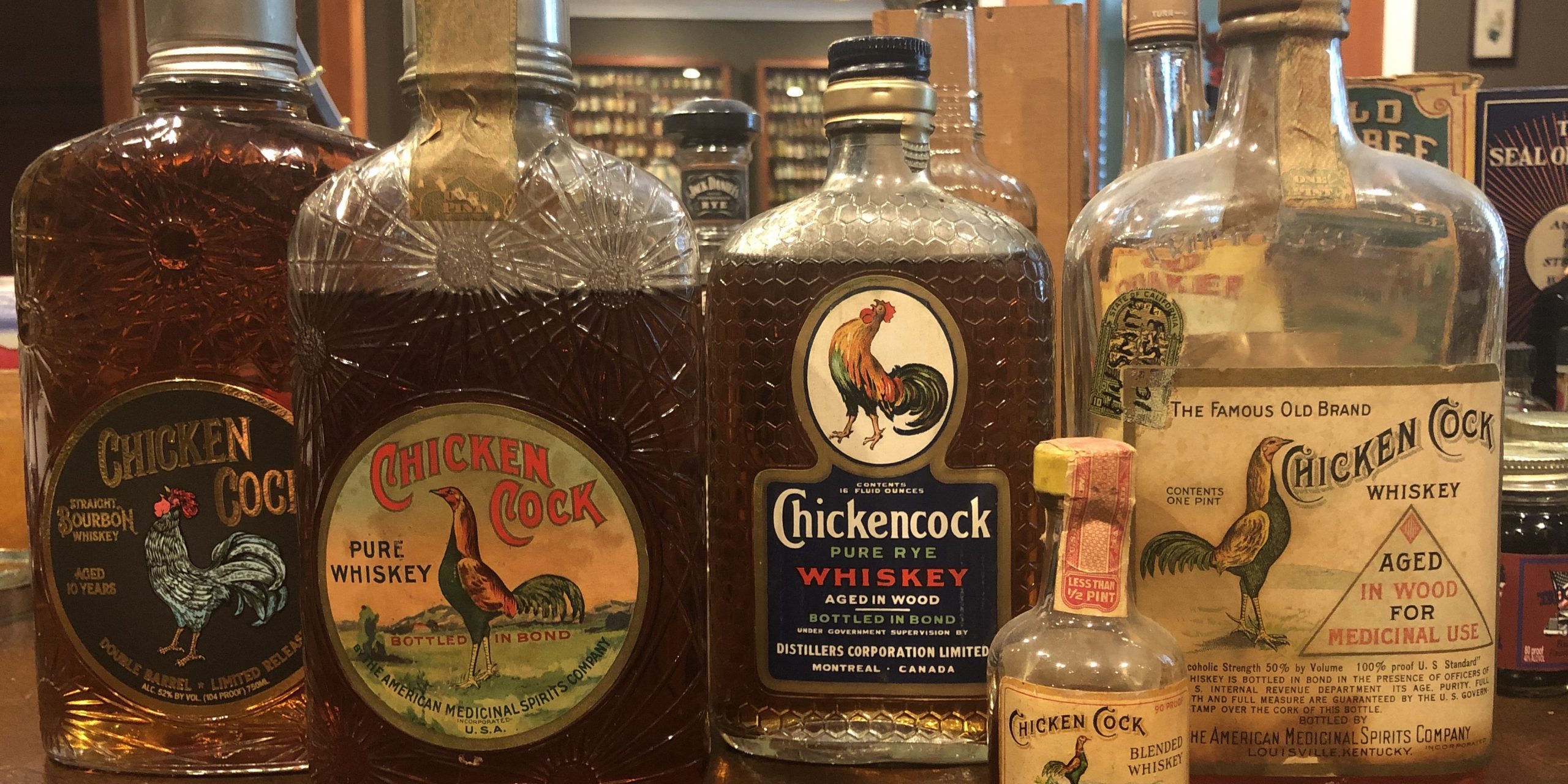 I’ve been meaning to post this article for quite some time so today I bring you my Chicken Cock Whiskey collection. There are several interesting things going on here besides the greatest name ever bestowed upon a whiskey. Let’s take a look.

First, let’s talk about the new release. Manti Antilla of Grain and Barrel Spirits took on the task of bringing “The Famous Old Brand” back to market. Chicken Cock was established in 1856 in Paris, Kentucky according to the Chicken Cock website. I’m not going to rehash the history here as the folks at Chicken Cock got it right so check out that link. What is astounding to me is not only did Mr. Antilla bring back the name and create a great label but also replicated the original prohibition pint bottle down to the sunbeam embossing and “NyQuil” dose cap. The example I have is the first release and was double-barreled at 104 proof. Since this release, Chicken Cock has followed up with several nice bottlings including one that looks like the version from Canada.

The Canadian version is a rye whiskey, which has also been reproduced by the fine people at Chicken Cock. It is said this version was smuggled in during prohibition and served at The Cotton Club. I have also heard the Canadian whiskeys from the time were smuggled in by Al Capone. What I didn’t understand for a long time is how the brand name was used in the United States and Canada. I turns out the brand was sold to Distillers Corporation Limited of Montreal, Canada along with several other brand names including Coon Hollow and Four Aces.

Toward the end of prohibition, Chicken Cock Whiskey changed hands again. The American Medicinal Spirits Company, owned by National Distillers Products Corporation, trademarked the brand and sold it for medicinal use. After the 21st amendment passed and prohibition ended, there was a push for the revival of Chicken Cock Whiskey. National Distillers Products Corp. poured efforts into advertising attempting to bring it back to its pre-prohibition glory. But it wasn’t that easy.

Below are photos of a pint of the American Medicinal Spirits version and a miniature 1/10th pint of the National Distillers Products Corporation version.

I hope you have enjoyed this blast from the past and look to the future of Chicken Cock, one of my favorite brands of all time!